I met my guide and we set off right away at 9 am. The city slowly wakes, because their Friday is like our Sunday. We went straight to the graffiti wall – a place where artists express their freedom though art and my guide explained everything about the revolution. He was part of it and his wife too, although she had just given birth to a baby. She wanted to be a part of it at any price. To quote my guide, “us Egyptians have to apologise to our fellow Egyptians for not having started the revolution years ago”. He told me about a young man, a doctor, who first lost one eye and then during the revolution he lost the second one (picture 1). 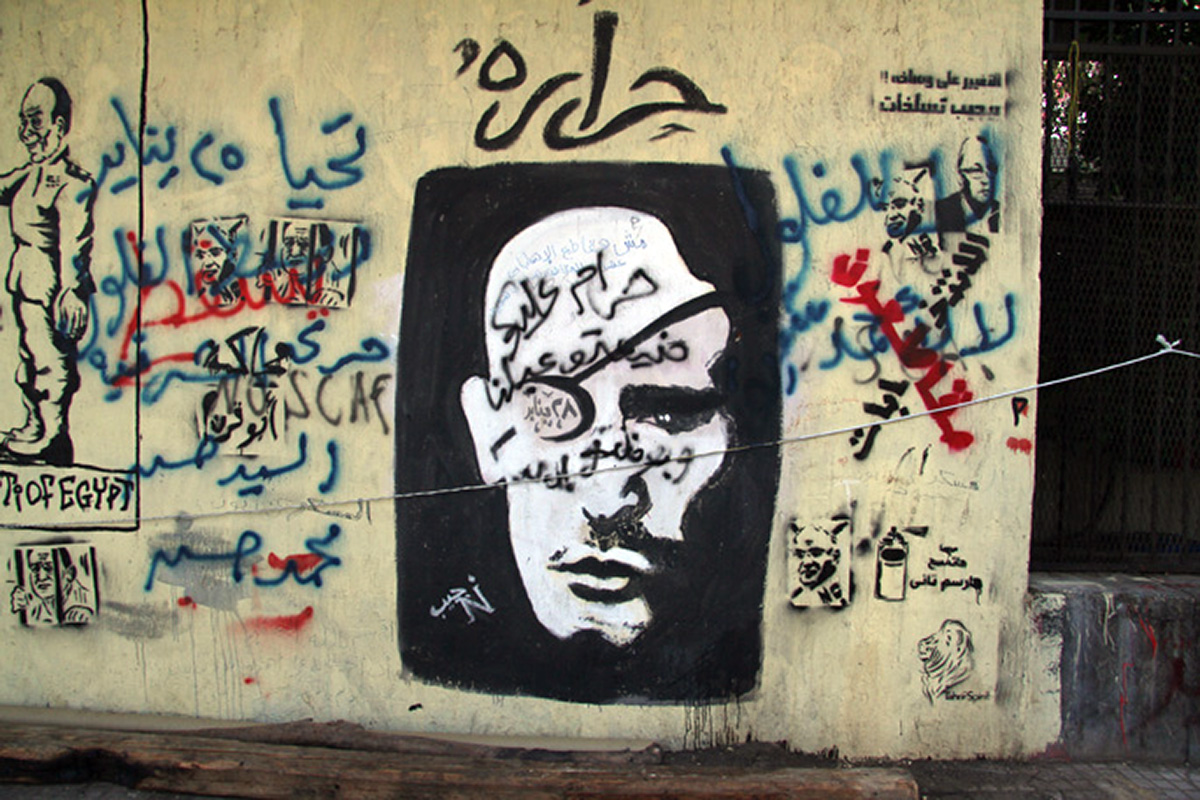 80 people lost their sight. There were many fatalities here. On the graffiti wall at Tahrir Square, there were pictures of a big strong man who was protecting many people like a brave angle. He was one of the many heroes of this revolution. At this point of time, he was still in prison (picture 2). The guide also told me about a Copt, who also died in the revolution.

During our conversation, he mentioned a young woman who was cruelly beaten by five men. She was taken to hospital with severe injuries. The revolution took the life of more than 1000 people in Egypt. I then had the chance to meet the father of the revolution in his tent. We asked him for permission to take a picture of him, which he granted (see picture 3). This man was a retired high-ranking officer who stands up the rights of the dead. He lives in this memorial tent, every day and every night. He was there from the beginning. He will not leave this place before theses murderers have been punished. He also includes the unknown murderers, that the secret police, according to statements, had positioned on the roofs and shot randomly into the crowd. Nobody knew who they would hit. It was like Russian roulette. After the revolution, the sniper’s names were wanted in order to prosecute them. The official statement was, that is was not known who was positioned on the roofs on that day. They are still at large. I wanted to know what it felt like knowing that the true murderers are still free. He replied: If you look at these special forces, you don’t know who is a murderer and who isn’t. It was terrifying. One could feel a deep sadness. I felt sorry for bringing it all back to him. However, he also was happy that people are coming to Cairo and do not just rely on the media. 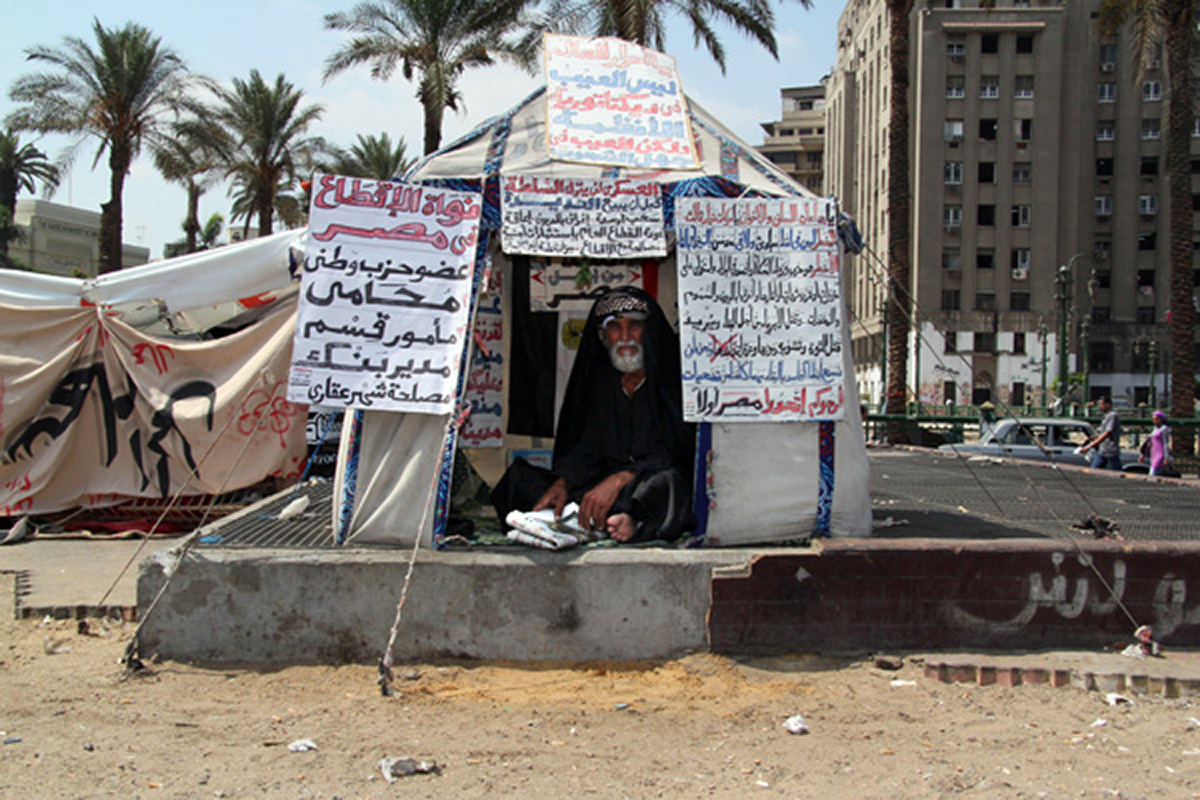 1 – To the liberals of this world: It’s not the dictatorship that has been shamed, but the ignorance of the people.

3 – The military will not step down from power until they have sold everything (withdrawal of credit, dumping loans, hindering the public sector via foreign investment, reconciliation with feudalism, overall budget plan for 2012-2013)

4 – All Salafists, brotherhoods and politicians of other ideologies: Threat lies not in a word or in principles, but in a party which: is run by corrupt leaders, brings the country down, steels the goods of the land, sells its cultural inheritance abroad, leads the country into debt, sells drugs and killed innocent people to stay in power. Now, they want to kill the revolution. However, we will not keep a bad regime in power, even at high cost.

I plead you to come together, Egypt first.

My guide told me: people worldwide believe it was mainly the poor who took part in the revolution. However, many of the rich were also involved. And we Muslims want to live side by side in peace with Christians. During the revolution, Muslims and Christians carried a common symbol: the crescent. A moon with a cross. They wanted to make it clear, that they would stay together and not to harm the other. After this conversation, we went to the Syrian tent. What I saw there were the horrific scenes left behind by a ruthless dictator.
The project leader and of course many others who helped with organisation wanted these scenes of horror to be openly exposed, so that no one could say: “We didn’t know”. Therefore, they want to travel around the world with this reminder.

We wish them every success!

We left at 8.30 am. We went to the Coptic monastery where Mary, Joseph and Jesus found shelter (escape form Israel to Egypt). It is located in a neighbourhood where many Jews, Christians and Muslims live together. It was clearly visible that Muslims, Jews and Christians living side by side was a matter of course. After our stay, we looked around the Egyptian Museum. Did you know, the first folding chair, lounger and condom came form Egypt? We then moved on to my guide’s mothers house. I was warmly greeted and she had cooked for us. We ate together. I also met an art student from his family and told her about my idea to arrange a competition. I wanted to find the best design for a T-shirt.
This T-shirt was to show everything that is in the hearts of young people, like hope, trust, future and criticism. I asked her to be my right-hand woman in my absence. She said there were many crazy artists in Cairo. I told her, that if the competition was a success, I would use part of the earnings to open soup kitchen in Cairo. We opened the competition on 7 November 2012. I had the feeling I was in good hands working with her and that the project would be well organised in my absence. I flew back to Germany with peace of mind.

On 7 November 2012, I met all the participants. At first, they were critical and held back towards me. In the course of the conversation I was able to conquer their hearts in the same way they conquered mine. They were really happy that I trusted in them and that we could launch such a project together. The first winner receives 600€ + 2€ per T-shirt sold. The second winner receives 300€ + 1 € per T-shirt sold and the third winner receives 150€ + 50 cent per T-shirt sold.
The students were totally amazed and our project began. You can hear more in February. The competition ended on 21 February 2013.

We are extremely excited and thank you for your interest.